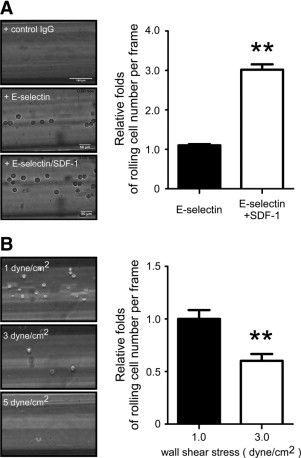 Suppression of Prostate Cancer Cell Rolling and Adhesion to Endothelium by 1α,25-Dihydroxyvitamin D3

The procedure was performed as previously described.
24
Selective uncoupling of p120(ctn) from E-cadherin disrupts strong adhesion.
J Cell Biol. 2000; 148: 189-202
Briefly, cells were detached, washed twice with PBS buffer, and suspended at 5 × 105 cells per ml in RPMI medium. Then, 1.5 × 104 cells were suspended as a hanging drop from the lid of the 24-well culture plate. After an 18-hour incubation period, the cells were subjected to the shear stress by passing them ten times through a standard 20-μl Gilson pipette tip. Cells were photographed under microscope to record aggregation behaviors within 30 minutes. The level of cell aggregation was determined by the cell aggregation index, 1-Na/N0, where Na and N0 are the number of particles after and before performing cell aggregation. Higher aggregation index value represents more cell aggregation.
25
Cell-cell adhesion mediated by a receptor-like protein tyrosine phosphatase.
The Journal of biological chemistry. 1993; 268: 16101-16104

To study adhesive behavior of circulating PCa cells, we constructed a dynamic flow-based microtube system to mimic the bone microvascular environment. SDF-1 is a chemokine that is expressed in human endothelium and transduces signals via interaction with receptor CXCR4, abundantly expressed on the PCa cells.
26
Use of the stromal cell-derived factor-1/CXCR4 pathway in prostate cancer metastasis to bone.
Cancer Res. 2002; 62: 1832-1837
To mimic the PCa rolling behavior in a dynamic status, PCa cells were perfused at physiological WSS through microtube lumens coated with IgG control, E-selectin, SDF-1, or E-selectin and SDF-1; and their rolling behaviors were examined. As shown in Figure 1A, DU145 PCa cells exhibited adhesive rolling behavior on E-selectin-coated and E-selectin/SDF-1-coated microtubes, but not on IgG-coated microtubes or SDF-1-coated microtubes (data not shown). Though SDF-1 by itself was not sufficient to induce PCa rolling, significantly more PCa cells were observed to roll on E-selectin/SDF-1-coated microtubes than on E-selectin-coated microtubes (Figure 1A). These data suggest that E-selectin is required for PCa cell interaction with endothelium, an important step for PCa metastasis. SDF-1 by itself is not sufficient to induce PCa rolling; rather a cooperative effect with E-selectin is needed to enhance cell rolling. Moreover, we tested PCa rolling behavior under different WSS, from 1 to 5 dyne/cm2, the comparable WSS range found in microvesicles,
27
Hemodynamic shear stress and its role in atherosclerosis.
JAMA. 1999; 282: 2035-2042
E-selectin/SDF-1-coated tubes. As expected, with increasing WSS, the PCa cell rolling number was decreased (Figure 1B). The results demonstrate establishment of a controllable flow-based system that mimics the microvascular environment and allows us to study the rolling behavior of circulating PCa cells with the option of varying specific parameters for our experimental strategy.

1,25-VD Suppresses PCa Rolling and Docking Capacity in the E-Selectin/SDF-1-Coated Microtube Under Flow

Numerous preclinical and epidemiological data support that vitamin D signals play important roles in the development, progression, and therapy for PCa. We sought to determine whether vitamin D could influence the circulating PCa cell adhesion to endothelium, and thus potentially mediate hematogenous dissemination during metastasis. Two PCa cell lines that express vitamin D receptor (VDR)
28
Vitamin D and prostate cancer: 1,25 dihydroxyvitamin D3 receptors and actions in human prostate cancer cell lines.
Endocrinology. 1993; 132: 1952-1960
,
29
Androgen signaling is required for the vitamin D-mediated growth inhibition in human prostate cancer cells.
Oncogene. 2004; 23: 3350-3360
(DU145 and PC-3 cells) were treated with 1,25-VD or vehicle control and then were injected into the E-selectin/SDF-1-coated microtubes under the flow condition. The rolling behaviors of cells were recorded and analyzed. Treatment with 1,25-VD suppressed PCa cell rolling as a function of total number of cells captured by microtubes, when compared to vehicle-treated cells as a control, under WSS ranging from 0.5 to 3 dyne/cm2 (Figure 2A). Rolling cell results as a function of WSS were consistent with our previous data demonstrating that rolling numbers are inversely correlated with WSS for both control and 1,25-VD-treated DU145 cells. Another key parameter to quantify cell adhesion is cell rolling velocity. We found that 1,25-VD increased cell rolling velocities of DU145 cells under different WSS (Figure 2B). We noted that under flow, most of the rolling PC-3 cells form static adhesion to the E-selectin/SDF-1-coated microtubes, and the PC-3 rolling velocity cannot be determined under this experimental condition. This increased rolling velocity, following 1,25-VD treatment could also contribute to a decrease in the PCa cell ability to adhere to endothelium.
After rolling, only the cells that form a firm adhesion and dock to endothelium have the opportunity to continue further metastatic events. We, therefore, observed effects of 1,25-VD on PCa cells docking within E-Selectin/SDF-1-coated microtubes. As expected, 1,25-VD-treated PCa cells exhibited statistically less cellular docking than vehicle control (Figure 2C). Taken together, we demonstrated for the first time that 1,25-VD treatment suppressed PCa cell rolling capacity by decreasing rolling numbers and increasing cell rolling velocities, thereby reducing the number of PCa cells docking on the E-selectin/SDF-1-coated microtubes under flow conditions. This result provides a novel functional mechanism by which 1,25-VD exerts its anti-tumor effects by interfering with circulating PCa cells adhering to endothelium and, thus, decreases the further invasion and metastases in distal organs.

To further confirm 1,25-VD effects on PCa heterotypic adhesion, a static cell-cell adhesion assay was applied by using human microvascular endothelial cells (HMEC-1). The expression of E-selectin and SDF-1 in HMEC-1 cells were first examined by immunofluorescent staining. HMEC-1 cells do express E-selectin, as well as SDF-1, but to a lesser extent (data not shown). 1,25-VD effects on PCa cell attachment to HMEC cells were then examined, and we found that treatment of PCa cells with 1,25-VD reduced cell adhesion to the HMEC-1 cell monolayer when compared with vehicle-treated cells in a static condition (Figure 3). In conjunction with the rolling data, we conclude that 1,25-VD can suppress PCa cell adhesion to endothelium in both dynamic flow and static conditions.

1,25-VD Has No Effect on E-Selectin and SDF-1 but Induces E-Cadherin Expression on PCa Cells

To study the mechanism by which 1,25-VD regulates PCa cell heterotypic adhesion, we first examined the effects of 1,25-VD on E-selectin and SDF-1 adhesive ligands expressions in the PCa cells using quantitative PCR assay. As shown in Figure 4A, there was no significant alteration of mRNA expression for E-selectin or SDF-1 ligand following 1,25-VD treatments. The expression of CD44, a well-known regulator of PCa cell and immune cell adhesion to vessel endothelium,
6
CD44 potentiates the adherence of metastatic prostate and breast cancer cells to bone marrow endothelial cells.
Cancer Res. 2004; 64: 5702-5711
,
30
Complete identification of E-selectin ligands on neutrophils reveals distinct functions of PSGL-1, ESL-1, and CD44.
Immunity. 2007; 26: 477-489
was examined by flow cytometry. As shown in Figure 4B, 1,25-VD had no effect on surface CD44 expression in DU145 cells. These results suggest that demonstrated effects on heterotypic adhesion by 1,25-VD are not mediated via the regulation of E-selectin- or SDF-1-associated adhesion molecule expression.
E-cadherin has been shown to be regulated by vitamin D. Decreased E-cadherin expression causes the loss of homotypic cell adhesion and, subsequently, an increase in potential for heterotypic cell adhesion events, including migration and invasion.
21
Epithelial-mesenchymal transitions in tumour progression.
Nat Rev Cancer. 2002; 2: 442-454
Consistent with a previous report,
31
Vitamin D(3) promotes the differentiation of colon carcinoma cells by the induction of E-cadherin and the inhibition of beta-catenin signaling.
J Cell Biol. 2001; 154: 369-387
we found that 1,25-VD promoted E-cadherin expression in PCa cells at both mRNA and protein levels (Figure 4, C and D). This induction of E-cadherin expression might account for the observed 1,25-VD-induced effects on PCa adhesion, including homotypic aggregation.

Supported by the NIH (CA 143876 to M.K.) and by the Department of Urology, University of Rochester Medical Center, Rochester, NY.