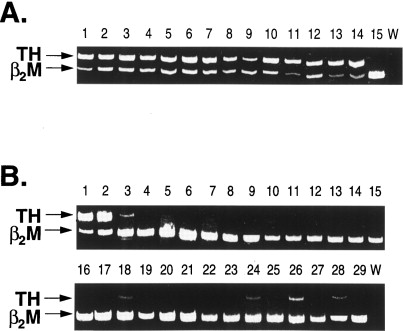 DOI:https://doi.org/10.1016/S0002-9440(10)65093-6
Use of Tumor-Specific Gene Expression for the Differential Diagnosis of Neuroblastoma from Other Pediatric Small Round-Cell Malignancies
Previous ArticleDiagnosis and Classification of the Small Round-Cell Tumors of Childhood
Next ArticlePresence of Sodium Dodecyl Sulfate-Stable Amyloid β-Protein Dimers in the Hippocampus CA1 Not Exhibiting Neurofibrillary Tangle Formation

Samples of 55 primary neuroblastoma tumors from untreated patients, obtained either from the Neuroblastoma Tumor Bank of the U. S. Pediatric Oncology Group (Memphis, TN), or from the Sydney Children's Hospital, Sydney, Australia, and representing all clinical stages, have been described previously.
6
Expression of the gene for multidrug resistance-associated protein and outcome in patients with neuroblastoma.
N Engl J Med. 1996; 334: 231-238
The 29 non-neuroblastoma tumor samples were obtained at diagnosis from patients presenting at the Sydney Children's Hospital included 2 phaeochromocytomas, 6 Ewing's sarcomas/PNETs, 7 lymphomas, 6 leukemias, 2 rhabdomyosarcomas, and 6 osteosarcomas. All samples were taken during the course of the patients’ routine management.

The increased survival rates observed over recent decades in pediatric malignancies have resulted largely from the development and streamlining of specific therapies for specific tumor types.
2
The molecular pathology of small round-cell tumours: relevance to diagnosis, prognosis and classification.
J Pathol. 1996; 178: 116-121
Accordingly, accurate diagnosis has become increasingly important in order to achieve optimal treatment. Despite improvements in molecular genetic techniques, differential diagnosis can still present a difficulty, particularly among the small round-cell tumors of childhood. For neuroblastoma, there have been reports of this disease being misdiagnosed as acute leukemia; often the correct diagnosis is made only postmortem.
12
Neuroblastoma presenting as acute monoblastic leukemia.
J Pediatr Hematol Oncol. 1996; 18: 206-212
,
13
Neuroblastoma presenting as acute lymphoblastic leukemia but correctly diagnosed after orbital fine-needle aspiration biopsy.
J Clin Neuro-Ophthalmol. 1991; 11: 158-161
Similarly, Kessler et al
14
Intrarenal neuroblastoma masquerading as Wilms tumor.
Urology. 1998; 51: 313-316
reported 5 cases of intrarenal neuroblastoma that were originally misdiagnosed as Wilms’ tumor, despite the fact that Wilms’ tumor is not included in the small round-cell tumors of childhood. Thus, there is a continuing need for the development of methods to improve the differential diagnosis of these malignancies. The present findings suggest that among the small round-cell tumors of childhood, coexpression of genes involved in the catecholamine biosynthetic pathway is a molecular characteristic specific to neuroblastoma.
Tyrosine hydroxylase is the first and rate-limiting enzyme in the catecholamine biosynthetic pathway, thus suggesting a requirement for tight regulatory control of the gene encoding this enzyme. This indeed appears to be the case, since the use of tyrosine hydroxylase expression as a specific marker of residual neuroblastoma cells has been demonstrated in numerous studies involving the detection of circulating tumor cells in patient's peripheral blood and bone marrow samples.
15
Detection of tyrosine hydroxylase mRNA and minimal neuroblastoma cells by the reverse transcription-polymerase chain reaction.
Eur J Cancer. 1991; 27: 762-765
,
16
Neuroblastoma cell detection by reverse transcriptase-polymerase chain reaction (RT-PCR) for tyrosine hydroxylase mRNA.
Int J Cancer. 1994; 57: 671-675
,
17
Early clinical evaluation of neuroblastoma cell detection by reverse transcriptase-polymerase chain reaction (RT-PCR) for tyrosine hydroxylase mRNA.
Eur J Cancer. 1995; 31A: 553-556
,
18
Detection of neuroblastoma cells in bone marrow and peripheral blood at diagnosis by the reverse transcriptase-polymerase chain reaction for tyrosine hydroxylase mRNA.
Cancer. 1995; 75: 2757-2761
,
19
Low specificity of PGP9.5 expression for detection of micrometastatic neuroblastoma.
Brit J Cancer. 1996; 75: 1779-1781
In the present study, the expression of tyrosine hydroxylase in the non-neuroblastoma tumor specimens was at very low levels, suggesting that it is unlikely to play any significant biological role. Such low-level expression might be due either to contamination of the tumor sample by surrounding tissue or to the phenomenon known as illegitimate transcription.
20
Illegitimate transcription: transcription of any gene in any cell type.
Proc Natl Acad Sci USA. 1989; 86: 2617-2621
Illegitimate transcription is the expression of otherwise tissue-specific genes in any cell type, with the detection of such expression resulting from the increased sensitivity afforded by PCR.
20
Illegitimate transcription: transcription of any gene in any cell type.
Proc Natl Acad Sci USA. 1989; 86: 2617-2621
,
21
Access to a messenger RNA sequence or its protein product is not limited by tissue or species specificity.
Science. 1989; 244: 331-334
Interestingly, of the two genes investigated in the present study, expression of dopa decarboxylase demonstrated greater specificity for neuroblastoma than did expression of tyrosine hydroxylase. Using coexpression of two target genes as a specific marker of neuroblastoma affords increased confidence in the accuracy of the differential diagnosis. In this regard, Hoon et al
22
Detection of occult melanoma cells in blood with a multiple-marker polymerase chain reaction assay.
J Clin Oncol. 1995; 13: 2109-2116
have recently reported that RT-PCR analysis performed with more than one target gene provides a more sensitive and reliable means of detecting residual melanoma than assays using only a single target gene.
A number of chromosomal abnormalities have proven useful in the characterization of individual pediatric disease types, as has been demonstrated in the present context by the use of the t(11;22. translocation for the diagnosis of Ewing's sarcoma. Similarly, for rhabdomyosarcoma, recent studies have shown that the t(2;13) and t(1;13) translocations are valuable in the diagnosis of alveolar rhabdomyosarcoma,
23
Detection of the t(2: 13) chromosomal translocation in alveolar rhabdomyosarcoma using the reverse transcriptase-polymerase chain reaction.
Genes Chromosomes Cancer. 1996; 16: 254-260
,
24
Amplification of the t(2;13) and t(1;13) translocations of alveolar rhabdomyosarcoma in small formalin-fixed biopsies using a modified reverse transcriptase polymerase chain reaction.
Am J Pathol. 1997; 150: 477-482
whereas a number of genetic rearrangements occurring in leukemia have also proven useful as markers for the detection of that disease.
25
Detection of chimeric BCR-ABL genes in acute lymphoblastic leukaemia by the polymerase chain reaction.
Lancet. 1991; 337: 1055-1058
,
26
The t(15;17) breakpoint in acute promyelocytic leukemia cluster within two different sites of the myl gene: targets for the detection of minimal residual disease by the polymerase chain reaction.
Blood. 1992; 79: 554-558
For neuroblastoma, although aggressive tumors are often characterized by deletions of chromosome 1p and amplification of the N-myc oncogene, these abnormalities occur, on average, in 30% or less of tumors.
27
Neuroblastoma: clinical significance of genetic abnormalities.
Cancer Surv. 1990; 9: 673-688
,
28
Genomic instability in 1p and human malignancies.
Genes Chromosomes Cancer. 1996; 16: 211-229
In contrast, the present results suggest that coexpression of tyrosine hydroxylase and dopa decarboxylase is ubiquitous in neuroblastoma and hence a useful molecular diagnostic marker for this malignancy.
As molecular techniques become increasingly valuable in the diagnosis and detection of childhood malignancies, their limitations are also becoming evident. For example, recent reports have identified the t(11;22) translocation in confirmed cases of rhabdomyosarcoma
29
Is the EWS/FLI-1 fusion transcript specific for Ewing sarcoma and peripheral primitive neuroectodermal tumor?.
Am J Pathol. 1996; 148: 1125-1138
as well as neuroblastoma,
10
EWS-FLI1 fusion transcripts identified in patients with typical neuroblastoma.
Eur J Cancer. 1997; 33: 239-243
indicating that it is possible for tumor markers to be present in more than one disease. Such findings highlight the need for a panel of molecular markers to maximize the likelihood of making the correct differential diagnosis. The results presented here suggest that expression of the tyrosine hydroxylase and dopa decarboxylase genes may prove a valuable aid in the differential diagnosis of neuroblastoma from other small round-cell tumors of childhood.

We thank the Neuroblastoma Biology Subcommittee of the Pediatric Oncology Group for the review and approval of this research project and for the samples of neuroblastoma tumors provided for analysis.

Supported by grants to M. D. N., M. H., and G. M. M. from the National Health and Medical Research Council of Australia and the New South Wales Cancer Council. J. G. is the recipient of an Australian Postgraduate Award.

Children's Cancer Institute Australia for Medical Research is affiliated with the University of New South Wales and Sydney Children's Hospital.