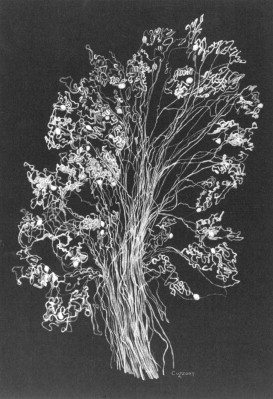 Links with Angiogenesis and Wound Healing
DOI:https://doi.org/10.1016/S0002-9440(10)65648-9
Chronic Inflammation
Previous ArticleRisk Factors and Progression of Atherosclerosis in Youth
Next ArticleHistopathological Evaluation of Apoptosis in Cancer

Late one night in the early days of electron microscopy I found myself staring at an electron micrograph (not mine) in the basement of Rockefeller University. “It is so beautiful,” I mumbled, “that it has to be true.” “What did you say?” asked a voice with a strong Romanian accent. George Palade did not let me get away with it.
Since then I have been very careful in evaluating the scientific importance of beautiful photographs, although I must confess that occasionally I am still tempted to repeat that controversial statement. A collection of microphotographs that qualify as truly beautiful illustrates a paper in this issue of The American Journal of Pathology.
1
Strain-dependent differences in angiogenesis in mice with chronic airway inflammation.
Am J Pathol. 1998; 153: 1099-1112
It is my privilege to comment on this excellent study by Thurston and colleagues at the University of California at San Francisco.
Oddly enough, there are few microscopic studies of vessels in chronic inflammation and even fewer of vessels in infection. Yet this should be a productive field because some bacteria are directly angiogenic; the vascular component of the wart-like growth called verruga peruana, caused by Bartonella bacilliformis, is truly angiomatous.
2
Bartonella bacilliformis stimulates endothelial cells in vitro and is angiogenic in vivo.
Am J Pathol. 1990; 136: 1125-1135
,
3
Interaction of Bartonella henselae with endothelial cells results in bacterial aggregation on the cell surface and the subsequent engulfment and internalisation of the bacterial aggregate by a unique structure, the invasome.
J Cell Sci. 1997; 110: 2141-2154
In drafting this commentary I decided to let the paper by Thurston et al speak largely for itself. The fact that it links chronic inflammation with angiogenesis gives me the opportunity to broaden the discussion to include fibroblasts and wound healing because, as will be apparent below, these processes are more closely linked than is generally understood. The link is provided by circulating stem cells.

The contribution of blood vessels to inflammation can be divided into two phases. In the first phase, which lasts roughly 24 hours, functional changes prevail: dilatation, increase in permeability, activation of the endothelium, and diapedesis. In the second phase, although some of the functional changes persist, structural changes occur. There is remodeling of vessels, mainly capillaries and venules, with extensive mitotic activity of the endothelium and pericytes. These two phases are generally recognized as “acute” and “chronic,” whereby it becomes apparent that biological and clinical notions of “acute” and “chronic” are somewhat out of phase, the biological events being telescoped into a shorter time.
4
Cells: Tissues and Disease: Principles of General Pathology. Blackwell Science, Cambridge, MA1996
The response of the microcirculation to a chronic stimulus is the issue addressed by the San Francisco group. As a model they chose Mycoplasma pulmonis infection of the airways in mice, a model relevant to human disease because M. pulmonis belongs to the same genus as the human pathogen M. pneumoniae. The authors studied the trachea between 1 and 8 weeks after infection; at each time interval the blood vessels were perfused with silver nitrate or treated by methods that characterize the phenotype of the endothelium (perfusion with suitable lectins, immersion in anti-vW antibody), then the trachea was cut open, flattened out, prepared as a whole mount, and transilluminated. The key feature of this preparation is that it shows the vascular network in three dimensions rather than in cross sections, thus allowing the observer to distinguish capillaries from arterioles and venules. This is important because it is well established that the pathophysiology of the three microvascular segments is very different.
Thurston et al find that the microcirculation responds to the chronic stimulus either by producing more capillaries or by dilating existing ones. Surprisingly, the type of response depends on genes: by testing two strains of mice, characterized by high versus low resistance to Mycoplasma infection, the authors found that the number of vessels doubled in mice of the resistant strain, whereas existing vessels in susceptible mice became wider. It is not clear whether the difference in vascular response is related to the difference in resistance to infection.
The observed capillary dilatation is more surprising than it may seem because it has been known since Cohnheim (1867)
5
Ueber Entzündung und Eiterung.
Virchows Arch (Path Anat). 1867; 40: 1-79
that capillaries in acute inflammation do not dilate significantly despite the increased blood pressure. Something else must therefore be happening to the capillary wall in chronic inflammation. Perhaps the tone of the endothelial cells is decreased; by growing endothelium on a pliable substrate we have shown that endothelial cells do in fact maintain a normal state of contraction or “tone.”
6
The concept of cellular tone: reflections on the endothelium, fibroblasts, and smooth muscle cells.
Perspec Biol Med. 1992; 36: 79-86
,
7
Reversible endothelial cell relaxation induced by oxygen and glucose deprivation.
Am J Pathol. 1994; 145: 211-219
With time, the endothelial cells in the dilated capillaries of the inflamed trachea multiply, as we had observed in the rat cremaster.
8
Capillary remodeling in acute inflammation: a form of angiogenesis.
FASEB J. 1992; 6: A938
At this point the dilated capillaries acquire functional properties of venules and a sort of metaplasia takes place. We hope to learn from further studies by the San Francisco team whether this change is reversible.
For both new vessels and old ones made larger, Thurston et al report that permeability to Evans blue appears to be in the normal range; however, both types of vessels are more susceptible to a permeability-increasing mediator, substance P. This finding is of interest for the pathophysiology of chronic inflammation as it suggests that newly formed or remodeled vessels could be maintained in an activated and/or leaky condition with doses of chemical mediators too small to affect normal vessels.