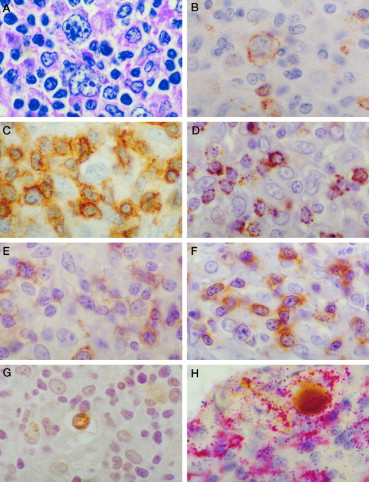 Mercury salts and paraffin were removed from sections (4 μm) of B5-fixed tissues by soaking in 2 g% iodine in xylene for 10 minutes followed by three washes (5 minutes each) in xylene only. Sections were then rehydrated and processed using the Apoptag in situdetection kit (Oncor) according to the manufacturer's instructions, except that tissues were counterstained with Gill's hematoxylin (Fisher Scientific, Fair Lawn, NJ). Positive control sections (from a case of HIV-related lymphadenopathy) were run with each experiment. TCRBCL cases were also double labeled for CD20 expression (L26) followed by biotinylated goat anti-mouse antibody (Dako) and a streptavidin-biotin detection system with alkaline-phosphatase and fast red substrate (Research Genetics) according to the manufacturer's instructions.

Immunophenotype of Small Lymphocytes in TCRBCLs and DLBCL

Expression of Proliferation- or Apoptosis-Associated Antigens

This work was presented in part at the 87th Annual Meeting of the United States and Canadian Academy of Pathology, Boston, MA, March 3, 1998.