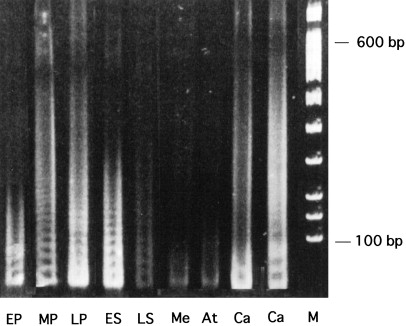 DOI:https://doi.org/10.1016/S0002-9440(10)65712-4
Expression of Telomerase Activity in Human Endometrium Is Localized to Epithelial Glandular Cells and Regulated in a Menstrual Phase-Dependent Manner Correlated with Cell Proliferation
Previous ArticleLoss of Heterozygosity and Microsatellite Instability inDe Novo versus Ex-Adenoma Carcinomas of the Colorectum
Next ArticleTumor Growth of FGF or VEGF Transfected MCF-7 Breast Carcinoma Cells Correlates with Density of Specific Microvessels Independent of the Transfected Angiogenic Factor

Human endometrial tissues were obtained aseptically from patients undergoing hysterectomy as treatment for benign neoplasms other than endometrial lesions. After washing in PBS, the tissues were minced into tiny fragments and incubated in Dulbecco's modified Eagle's medium (DMEM) without phenol red (Gibco, Gaithersburg, MD), containing 50 U/ml penicillin, 50 μg/ml streptomycin (Gibco), 0.25 μg/ml fungizone (Gibco), 0.1 mg/ml DNAse I (Takara), and 180 U/ml collagenase type 3 (Funakoshi, Tokyo, Japan) for 60 minutes at 37°C. After gentle pipetting, the solution was poured into a 50-ml tube and settled for 5 minutes at room temperature (solution A). The supernatants of the solution A were passed through a nylon filter (pore size, 40 μm; Becton Dickinson Labware, Bedford, MA). The pass-through fractions were centrifuged and washed with PBS. The cell pellets were resuspended and cultured in basal medium composed of 1:1 (DMEM) without phenol red (Gibco)/Ham's F12 (Gibco) containing 50 U/ml penicillin, 50 μg/ml streptomycin (Gibco), 0.25 μg/ml fungizone (Gibco), 10% charcoal-stripped bovine serum, and 0.1% ITS premix (Becton Dickinson Labware) for 60 minutes at 37°C. The dishes were gently swung, and the floating cells were carefully aspirated and discarded. The highly purified human endometrial stromal cells at the bottom of the dish were used for the experiments. The precipitates of the solution A obtained after settling for 5 minutes were resuspended in PBS and passed through a 40-μm nylon filter. The tissue fragments that remained on the mesh were recovered, washed with PBS, resuspended in trypsin/EDTA, and incubated for 15 minutes at 37°C to obtain single-cell suspensions. The cells were collected by centrifugation, washed and resuspended in basal medium, plated on plastic culture dishes, and incubated for 60 minutes at 37°C. After incubation, the floating endometrial epithelial cells were collected and used for experiments. Immunohistochemical analysis for keratin-vimentin staining indicated that the purity of these cell preparations was greater than 99%.

The endometrial epithelial cells isolated from proliferative-phase endometria were plated at a density of 5 × 105 per 35-mm matrix-coated dish and cultured in basal medium at 5% CO2 at 37°C. For estrogen induction assay, 20 nmol/L estradiol in 0.1% ethanol or vehicle (0.1% ethanol) was added to basal medium.

Cell proliferative activity was measured by 3-(4,5-dimethyl-2-thiazolyl)-2,5-diphenyl-2H tetrazolium bromide (MTT) assay as described previously,
20
Rapid colorimetric assay for cellular growth and survival: application to proliferation and cytotoxicity assays.
J Immunol Methods. 1983; 65: 55-63
and the relative MTT activity of the cultured cells at days 0, 2, 4, 6, and 8 was calculated as a proliferation index (activity at day 0 was defined as 100).

To further confirm the source of telomerase activity, we next localized human telomerase RNA (hTR) using in situ RNA hybridization. Significant hTR signals were observed in epithelial glandular cells in proliferative phase (Figure 4). However, interestingly, hTR signals were also detected in secretory phase, although less frequently. No or only faint signals were observed in other components, such as stromal cells. These findings further demonstrate the epithelial-specific expression of telomerase activity in human endometrium.

Changes in Telomerase Activity during in VitroCulture of Endometrial Cells