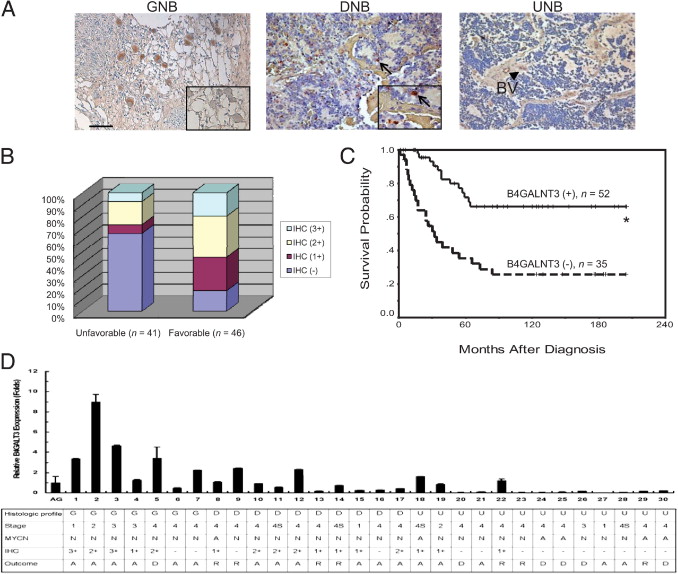 Human NB tissue sections were deparaffinized in xylene and rehydrated in a series of graded alcohols. After quenching the activity of endogenous peroxidase with 1% H2O2 in PBS for 10 minutes, the sections were rinsed three times with PBS and then were incubated with 5% nonfat milk/PBS for 30 minutes to reduce nonspecific binding. Sections were incubated with an anti-B4GALNT3 polyclonal antibody (1:400; Sigma-Aldrich, St. Louis, MO) diluted with 5% nonfat milk/PBS for 16 hours at 4°C. After rinsing twice with PBS, the Super Sensitive link-label immunohistochemical (IHC) detection system (BioGenex, San Ramon, CA) was used, and specific immunostaining was visualized using 3,3-diaminobenzidine liquid substrate system (Sigma-Aldrich). All the sections were counterstained with hematoxylin for 1 minute and were mounted with UltraKitt (J.T. Baker, Deventer, Holland). Negative controls were performed by replacing primary antibodies with a control nonimmune IgG at the same concentration. To further confirm the specificity of staining, B4GALNT3 peptide (10 μg/mL) was used to block binding of anti-B4GALNT3 antibody to tissues.

Total cellular RNA was isolated from cells grown to 70% confluence using TRIzol reagent (Invitrogen) according to manufacturer protocols as previously described.
26
The α(1,3)-fucosyltransferase Fuc-TIV, but not Fuc-TVII, generates sialyl Lewis X-like epitopes preferentially on glycolipids.
J Biol Chem. 2002; 277: 47786-47795
For cDNA synthesis, 2 μg of total RNA was used as template in a 25-μL reverse transcription reaction. PCR reactions were incubated for 5 minutes at 95°C, followed by 35 amplification cycles with 30 seconds of denaturation at 94°C, 30 seconds of annealing at 60°C, and 30 seconds of extension at 72°C. For real-time PCR, the quantitative PCR system Mx3000P (Stratagene, La Jolla, CA) was used to analyze gene expression according to the manufacturer's protocol. Briefly, reactions were performed in a 25-μL volume with 2 μL of cDNA, 400 nmol/L each of sense and antisense primers, and 12.5 μL of Brilliant SYBR Green QPCR Master Mix (Stratagene). For GAPDH detection, sense and antisense primers were 5′-ACAGTCAGCCGCATCTTCTT-3′ and 5′-GACAAGCTTCCCGTTCTCAG-3′, respectively, generating a 259-bp fragment. For detection of B4GALNT3, sense and antisense primers were 5′-CTACAGCGCATTGTGAACGT-3′ and 5′-TGGTTCTTCACAGGCACGAC-3′, respectively, generating a 320-bp fragment. The PCR products were confirmed to be correct by DNA sequencing.

Cells were plated in triplicate wells of 96-well plates at a density of 3 × 103 cells per well. After incubation for 24 or 48 hours, 3-(4,5-dimethyl-2 thiazolyl)-2,5-diphenyl-2H-tetrazolium bromide solution (MTT; Sigma-Aldrich) was added to each well at a final concentration of 0.5 mg/mL and was incubated for 4 hours to allow MTT reduction. Formazan crystals were dissolved in a solution containing 0.01 mol/L HCl and 10% (w/v) SDS, and absorbance was measured at the dual wavelengths of 570 and 630 nm using a spectrophotometer.

Cells (1 × 104) in 0.3% (w/v) Bacto Agar (Sigma-Aldrich) in DMEM supplemented with 10% FBS were overlaid on a base of 0.6% Bacto Agar in DMEM supplemented with 10% FBS in 6-well plates. Cells were incubated at 37°C, 5% CO2 atmosphere. Triplicate wells were used for each cell line, and three independent experiments were performed. The number of colonies with a diameter >30 μm was counted on day 7.

Transwell motility assays were performed using 8-μm pore, 6.5-mm polycarbonate Transwell filters (Corning Costar Corp., Cambridge, MA). Single-cell suspensions (3 × 105 cells) were seeded in serum-free DMEM medium onto the upper surface of the filters and were allowed to migrate toward 10% fetal calf serum/DMEM or 1 μg/mL of extracellular matrix proteins (collagen IV, fibronectin, and laminin) (Sigma-Aldrich). After a 48-hour incubation period, cells that had migrated to the underside of the filter were fixed, stained with 0.5% crystal violet (Sigma-Aldrich), and counted under a microscope at ×100 in five random fields.
Cell invasion assays were performed in BioCoat Matrigel invasion chambers (Becton-Dickinson, Bedford, MA) according to manufacturer protocols. Briefly, 500 μL of DMEM containing 10% FBS was loaded in the lower part of the chamber, and 3 × 105 cells in 500 μL of serum-free DMEM were seeded to the upper part. Cells were allowed to invade the Matrigel for 48 hours in a humidified tissue culture incubator at 37°C, 5% CO2 atmosphere. Noninvading cells on the upper surface of the membrane were removed from the chamber, and the invading cells on the lower surface of the membrane were fixed with 100% methanol and were stained with 0.5% crystal violet. Invading cells were counted in each well under a phase contrast microscope. The mean ± SD values were calculated from the numbers of invading cells from three independent experiments under the microscope.
To determine the contribution of β1 integrin to migration and invasion, cells were preincubated with 10 μg/mL of β1 integrin blocking antibody (clone P4C10; Millipore Corp., Billerica, MA) or 10 μg/mL of control mouse nonimmune IgG antibody (SouthernBiotech, Birmingham, AL) for 30 minutes at 37°C.

SPSS 10.0 for Windows software (SPSS Inc., Chicago, IL) was used to perform the statistical analyses. The comparison between pairs of categorical variables was evaluated using Pearson's χ2 test. The significance of the variations between the data resulting from different treatments was assessed by Student's t-test. Kaplan-Meier method was used for estimation of survival probabilities in various subgroups, and the significant differences in each group were analyzed by log-rank tests. Each variable possibly affecting patient survival was further evaluated by univariate and multivariate Cox proportional hazards model analysis. All statistical tests were two-sided, and those with a P < 0.05 were considered significant.

B4GALNT3 Expression Correlates with the Differentiation Status of NB Tumors

To evaluate specific gene expression in heterogeneous tumors such as NB, we demonstrated that IHC analysis is a preferred method.
19
GRP78 expression correlates with histologic differentiation and favorable prognosis in neuroblastic tumors.
Int J Cancer. 2005; 113: 920-927
,
27
Identification of GRP75 as an independent favorable prognostic marker of neuroblastoma by a proteomics analysis.
Clin Cancer Res. 2008; 14: 6237-6245
Therefore, expression of B4GALNT3 in all 87 NB tumor tissues was examined by IHC analysis. Positive B4GALNT3 staining was observed specifically in the cytoplasm of ganglion cells of GNB tumor tissues (Figure 1A); however, expression was negligible in schwannian stromal cells. B4GALNT3 immunostaining was blocked completely by a specific peptide (Figure 1A), confirming the specificity of the anti-B4GALNT3 antibody for the IHC studies. In addition to the mature ganglion cells, neuroblastic cells showing various differentiated states in either GNB or DNB also demonstrated positive staining in the cytoplasm (Figure 1A), whereas undifferentiated neuroblastic cells usually showed negative staining (Figure 1A). Thus, B4GALNT3 expression positively correlates with the differentiation status of human NB.