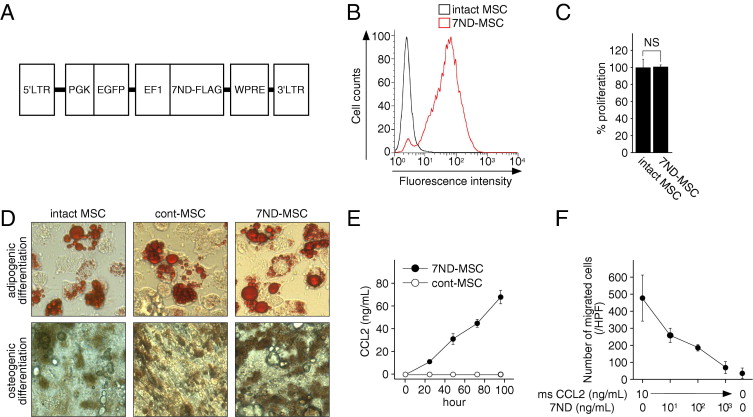 Male 6- to 10-week-old C57BL/6J mice were purchased from Chubu Kagaku Shizai (Nagoya, Japan). The animal experiments were approved by the Institutional Ethics Committee for Laboratory Animal Research, Nagoya University School of Medicine, and were performed according to the guidelines of the institute.

The proliferation of 7ND-MSCs was compared with that of intact MSCs by using a colorimetric assay (TetraColor One; Seikagaku Co., Tokyo, Japan). MSCs (2000 cells per well) were seeded onto 96-well plates. After 72 hours of incubation, 10 μL of TetraColor One reagent was added to each well, and absorbance at 450 nm was measured 4 hours later. Percentage of proliferation was calculated as follows: (OD value of 7ND-MSC/OD value of intact MSCs) × 100.

Purification and Quantification of 7ND

The inhibitory effect of purified 7ND on the CCL2-CCR2 axis was assessed using transwell assays.
18
Stanniocalcin-1, an inhibitor of macrophage chemotaxis and chemokinesis.
Am J Physiol Renal Physiol. 2004; 286: F356-F362
Briefly, macrophage-like, CCR2-expressing RAW264.7 cells were serum starved in DMEM with 1% FBS overnight and were then seeded (5 × 105 cells in DMEM with 1% FBS per well) onto the upper chamber of a cell culture insert with a pore size of 8 μm (BD Biosciences, San Jose, CA). Recombinant mouse CCL2 (final concentration, 10 ng/mL; PeproTech, Rocky Hill, NJ) and various concentrations (final concentration, 0 to 1000 ng/mL) of purified 7ND were added to the lower chamber, to which cells were allowed to migrate for 4 hours. The membranes were fixed with 4% paraformaldehyde and were stained with Giemsa. For quantitative analysis, four fields were randomly selected, and migrated cells were counted under a light microscope.

Lung injury was induced by endotracheal BLM injection as described elsewhere.
19
Bone marrow-derived progenitor cells in pulmonary fibrosis.
J Clin Invest. 2004; 113: 243-252
Briefly, mice were treated with 6 U/kg body weight of BLM diluted in sterile saline or the same volume of sterile saline only. Cont-MSC, 7ND-MSC (5 × 105 in 200 μL of PBS), or the same volume of PBS was injected into the tail vein 24 hours after BLM. Animals were sacrificed on days 2, 3, 7, and 14 (four to eight mice per subgroup on each day) or were untreated until day 28 (6 to 21 mice per subgroup) after BLM exposure. For histopathologic examination, lungs were fixed with 4% paraformaldehyde and were embedded in O.C.T. compound (Sakura Finetek, Tokyo, Japan). Otherwise, the minced left lungs were homogenized in 400 μL of PBS by using the Multi-Beads Shocker (Yasui Kikai, Osaka, Japan), and the minced right lungs were lysed in 400 μL of radioimmunoprecipitation assay buffer containing a protease inhibitor cocktail (Calbiochem, La Jolla, CA). After removal of debris by centrifugation, the homogenates were used for collagen assay and the lysates were used for CCL2, IL-1β, and IL-6 measurements. Immunostaining of 7ND-FLAG (day 2) was performed as reported previously.
16
Anti-monocyte chemoattractant protein-1 gene therapy attenuates renal injury induced by protein-overload proteinuria.
J Am Soc Nephrol. 2003; 14: 1496-1505
Fibrosis was scored on sections of whole lungs (day 14) according the Ashcroft method.
20
Simple method of estimating severity of pulmonary fibrosis on a numerical scale.
J Clin Pathol. 1988; 41: 467-470
Collagen content (days 14 and 28) in the left lung was evaluated by Sircol soluble collagen assay kit (Biocolor Ltd., Belfast, Ireland). Contents of CCL2, IL-1β, and IL-6 (day 14) in the right lung were assessed by Cytometric Bead Array flex sets (BD Biosciences).

BAL samples were collected on days 3 and 7 after BLM as described elsewhere.
21
A rapid flow cytometric method for determining the cellular composition of bronchoalveolar lavage fluid cells in mouse models of asthma.
J Immunol Methods. 2004; 288: 111-121
Differential counts of BAL cells were performed on 500 cells per cytospin slide.

Analysis of variance was used to compare the means from two or more experimental groups, followed by Fisher's least significant difference post hoc tests. The survival benefit in mice treated with 7ND-MSC was analyzed by the log-rank test. Statistical differences between groups were considered significant at P < 0.05.

The important domains in the 7ND-containing lentiviral vector are shown in Figure 1A. Characterization of MSCs transduced with 7ND-EGFP indicated that the transduction efficiency of 7ND was almost 100% (Figure 1B). EGFP fluorescence of the cells was consistently observed even after 2 months (data not shown). 7ND-MSCs can proliferate and differentiate into osteogenic and adipogenic lineages similar to intact MSCs (Figure 1, C and D). We analyzed the tissue distribution of MSCs after injection by RT-PCR to detect 7ND and EGFP in mice with 7ND-MSC and cont-MSCs, respectively. 7ND and EGFP were detectable strongly in the lung (prolonged for 14 days) and weakly in the liver and spleen on day 3 (not detectable on day 14) (data not shown). These results suggest that neither lentivirus nor 7ND perturbed the innate properties of MSCs.

We identified many MSCs in BLM-treated lungs by immunostaining 24 hours after injection (Figure 2A). Controls showed minimal background. As described previously herein, 7ND expression was strongest in the lung. In another experiment, the serum level of 7ND was highest on day 2 after injection and was undetectable on day 11 (Figure 2B), suggesting that the number of MSCs diminished over time in vivo.

We treated mice with 6 U/kg of BLM to mimic the human disease, although 1.25 to 4 U/kg of BLM is generally used.
22
Murine models of pulmonary fibrosis.
Am J Physiol Lung Cell Mol Physiol. 2008; 294: L152-L160
This treatment resulted in severe weight loss, and approximately 45% of the mice died on day 14 (Figure 2, C and D). Weight loss was significantly lower in 7ND-MSC mice (Figure 2C). The survival rate on day 28 was significantly higher in 7ND-MSC mice (57.1%) than in BLM + PBS mice (20.0%) or cont-MSC mice (30.0%) (Figure 2D). BLM-treated mice developed subpleural inflammation with loss of normal alveolar, bronchi, and vasculature (Figure 2E). Administration of cont- and 7ND-MSCs reduced the extent of inflammation. However, significantly larger areas were undamaged in 7ND-MSC mice (Figure 2E), as confirmed by the Ashcroft method (Figure 2F). Accordingly, 7ND-MSC significantly reduced collagen content in the lung, whereas cont-MSC had a minimal effect (Figure 2G). We observed no evidence of MSC-induced toxicity.

Next, we performed differential counts of BAL cells and quantified CCL2, IL-1β, and IL-6 in the lung. BLM but not saline significantly increased the accumulation of various kinds of inflammatory cells (Figure 3A). The numbers of total cells, macrophages, lymphocytes, eosinophils (except on day 3) and neutrophils (except on day 7) in BAL fluids were significantly lower in 7ND-MSC–treated mice (Figure 3A). Cont-MSC minimally inhibited neutrophil infiltration on day 3. 7ND-MSCs and cont-MSCs significantly decreased the lung content of IL-6 and IL-1β, but the 7ND-MSC–induced decrease was greater. 7ND-MSCs possessed a significantly higher ability to decrease CCL2 production than did cont-MSCs (Figure 3B).

The evolution of viral vectors made it possible to deliver recombinant DNA molecules efficiently into host cells and let them be desirable for many applications. Especially, lentiviral vector constructs have proved to be very productive in terms of transduction owing to their ability to infect replicating and nonreplicating cells, including stem cells.
23
Transduction of nondividing cells using pseudotyped defective high-titer HIV type 1 particles.
Proc Natl Acad Sci U S A. 1996; 93: 15266-15271
Characterization of 7ND-MSCs transduced by a lentiviral vector indicated that the transduction efficiency of 7ND was virtually 100% (Figure 1B) and that secretion of 7ND was very high (Figure 1E). We identified many MSCs in the BLM-treated lungs by immunostaining 24 hours after injection (Figure 2A). Because chemokines are locally retained on matrix heparan sulfate proteoglycans, thereby establishing a concentration gradient,
24
The many roles of chemokines and chemokine receptors in inflammation.
N Engl J Med. 2006; 354: 610-621
these results suggest that MSCs can be a useful 7ND vehicle for efficient inhibition of CCL2.
Persistence of MSCs in vivo may be tumorigenic
25
Sarcoma derived from cultured mesenchymal stem cells.
Stem Cells. 2007; 25: 371-379
; however, we found that the 7ND serum level was highest on day 2 after injection and was undetectable on day 11 (Figure 2B), suggesting that the number of MSCs diminished over time in vivo. Therefore, an appropriate decrease in 7ND-MSCs over time could ensure clinical safety.
The numbers of total cells, macrophages, lymphocytes, eosinophils (except on day 3), and neutrophils (except on day 7) in BAL fluids were significantly lower in 7ND-MSC–treated mice (Figure 3A). Cont-MSC minimally inhibited neutrophil infiltration on day 3, similar to previous studies.
26
Interleukin 1 receptor antagonist mediates the antiinflammatory and antifibrotic effect of mesenchymal stem cells during lung injury.
Proc Natl Acad Sci U S A. 2007; 104: 11002-11007
,
27
Modulation of cytokine and nitric oxide by mesenchymal stem cell transfer in lung injury/fibrosis.
Respir Res. 2010; 11: 16
BLM-treated CCL2−/− mice and CCR2−/− mice showed a similar feature that infiltration of lymphocytes and macrophages, but not neutrophils, decreased in the lungs.
28
C-C chemokine receptor 2 (CCR2) deficiency improves bleomycin-induced pulmonary fibrosis by attenuation of both macrophage infiltration and production of macrophage-derived matrix metalloproteinases.
J Pathol. 2004; 204: 594-604
,
29
Important roles for macrophage colony-stimulating factor CC chemokine ligand 2, and mononuclear phagocytes in the pathogenesis of pulmonary fibrosis.
Am J Respir Crit Care Med. 2007; 176: 78-89
7ND may attenuate lung fibrosis by inhibiting the recruitment of eosinophils that produced fibrogenic cytokines (Figure 3A).
30
TNF-α-mediated lung cytokine networking and eosinophil recruitment in pulmonary fibrosis.
J Immunol. 1997; 158: 954-959
Taken together, these results suggested that MSC and 7ND cooperatively inhibit accumulation of inflammatory cells. Subsequently, 7ND-MSCs significantly decreased the lung content of IL-6, CCL2, and IL-1β to a greater degree than did cont-MSCs (Figure 3B).
7ND gene transfer into muscles on day 7, but not on day 3, after BLM improved histopathologic findings.
31
Anti-monocyte chemoattractant protein-1 gene therapy attenuates pulmonary fibrosis in mice.
Am J Physiol Lung Cell Mol Physiol. 2004; 286: L1038-L1044
In this study, administration of 7ND-MSCs 24 hours after BLM was effective. The highest concentration of 7ND was obtained on day 7 after 7ND gene transfer and on day 2 after 7ND-MSC administration. This discrepancy of effectiveness may result from different routes of 7ND administration, different local concentrations of 7ND in the lung, and different timing of 7ND production.
Mice were treated with 6 U/kg of BLM to mimic the human disease, with approximately 40% mortality, although 1.25 to 4 U/kg of BLM is generally used.
22
Murine models of pulmonary fibrosis.
Am J Physiol Lung Cell Mol Physiol. 2008; 294: L152-L160
This treatment resulted in severe weight loss, and approximately 45% of the mice died on day 14 (Figure 2, C and D). The survival rate was significantly higher in 7ND-MSC mice (Figure 2D). Despite recent progress in medicine, mortality of patients with ARDS minimally decreased.
32
Has mortality from acute respiratory distress syndrome decreased over time? a systematic review.
Am J Respir Crit Care Med. 2009; 179: 220-227
,
33
Recent trends in acute lung injury mortality: 1996–2005.
Crit Care Med. 2009; 37: 1574-1579
Thus, these data provide a rationale for testing 7ND-MSCs for patients with ARDS.