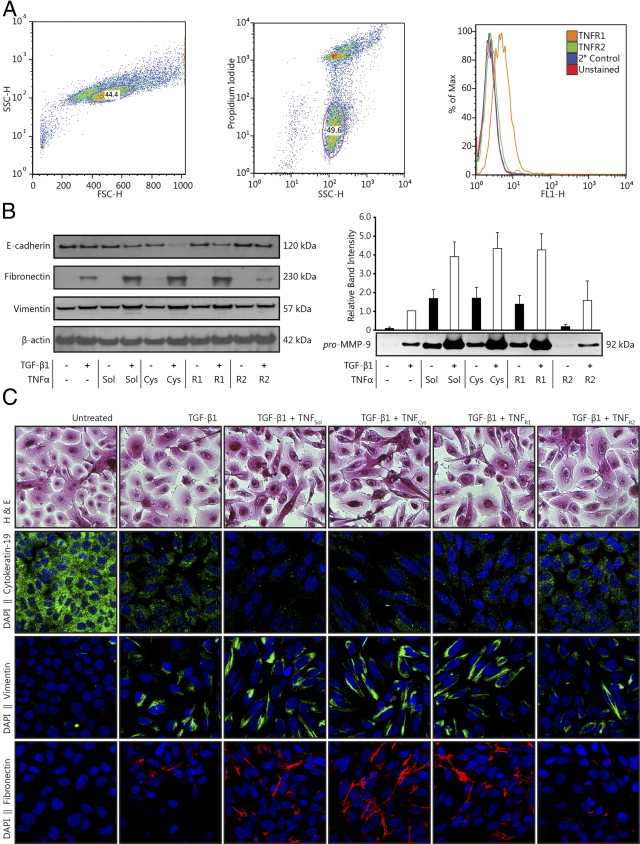 Nuclear and non-nuclear fractions from PBECs were isolated using the NE-PER Nuclear and Cytoplasmic Extraction Kit (78833; Pierce, Rockford, IL), according to the manufacturer's instructions.

Culture medium was separated under nonreducing conditions on an 8% SDS-PAGE gel containing 1% gelatin. Gels were incubated with 2.5% Triton X-100 for 30 minutes and then overnight in substrate buffer (50 mmol/L Tris-HCl, 200 mmol/L NaCl, and 5 mmol/L CaCl2). Bands were visualized by staining with Coomassie stain (40% methanol, 10% acetic acid, and 0.05% Coomassie Brilliant Blue R250).

Starting protein concentration was assayed via bicinchoninic acid protein assay. Immunoprecipitation of key signaling proteins was performed using the Catch and Release kit (17–500; Millipore, Watford, UK), according to the manufacturer's instructions with incubation and washing steps optimized for each antibody. Beads were pre-cleared with pan-IgG antibody and efficacy and specificity of isolation determined via SDS-PAGE and Western blot.

Formalin fixed tissue sections from patients with OB and unused donor lung were de-waxed in Xylenes and rehydrated in sequentially decreasing concentrations of ethanol. Slides were boiled in 0.1 M EDTA (pH 8.0) for 10 minutes to facilitate antigen retrieval, the staining process was then performed as previously described.

Differences in EMT marker expression (normalized to β-actin as a loading control), phosphorylation of key signaling proteins (normalized to the unphosphorylated protein as a loading control), and collagen secretion were assessed using a Mann-Whitney U-test. Data are expressed as mean ± SEM. Differences with P values of <0.05 were considered statistically significant.

TNF-α, an inflammatory cytokine capable of accentuating but not driving EMT, signals via two distinct transmembrane receptors (TNFR1 and TNFR2), which play independent roles in cellular responses.
16
The TNF and TNF receptor superfamilies: integrating mammalian biology.
Cell. 2001; 104: 487-501
,
26
Tumor necrosis factor receptor cross-talk.
Febs J. 2011; 278: 888-898
Untreated PBECs express TNFR1 on their cell surface, but express little to no TNFR2 (Figure 1A). Stimulation with TGF-β1 ≤10 ng/mL had no effect on basal TNFR1 or TNFR2 expression on the cell surface in PBECs (data not shown). To investigate the relative contribution of TNFR1 and TNFR2 ligation on the accentuation of TGF-β1–driven EMT, we used two distinct isoforms of TNF-α; the 26 kDa membrane expressed form (TNFcys) and the 17 kDa soluble form (TNFsol). TNFcys can signal via both TNFR1 and TNFR2, however, TNFsol signals preferentially via TNFR1.
17
The transmembrane form of tumor necrosis factor is the prime activating ligand of the 80 kDa tumor necrosis factor receptor.
Cell. 1995; 83: 793-802
Co-stimulation of PBECs with both TGF-β1 and TNFsol, or TNFcys strongly accentuates TGF-β1–driven EMT compared to TGF-β1 alone, suggesting signaling is occurring via TNFR1. To confirm this, PBECs were co-treated with TGF-β1 and TNFR1 (TNFcysR1), and TNFR2 (TNFcysR2)-specific mutant TNFcys and EMT assessed. Only TNFcysR1 was able to accentuate TGF-β1–driven EMT confirming the accentuation of TGF-β1–driven EMT occurs via TNFR1 through both TNFsol and TNFcys. None of the TNF isoforms alone had an effect on EMT protein marker expression alone, but TNFsol, TNFcys, and TNFcysR1 alone induced the secretion of pro-MMP-9 (Figure 1, B and C).

Sequential sections from OB lung tissue and unused donor lung as a control were used to investigate the localization and phosphorylation of TAK1 in the airway. Sections were stained for either total TAK1 or phospho-TAK1 and counterstained with the epithelial marker E-cadherin and DAPI as a nuclear marker. Total TAK1 was located throughout all airway cells and there was no detectable difference in the intensity of expression between normal and OB lung tissue. In contrast levels of phospho-TAK1 were higher in epithelial cells in OB tissue compared to normal. It was also noted that phospho-TAK1 displayed evidence of nuclear localization, which was more pronounced in OB tissue (Figure 7A; see also Supplemental Figure S5A at http://ajp.amjpathol.org).
To quantify the observations previously described, immunocytochemistry was performed on cultured PBECs treated with TGF-β1 or TNF-α for 30 minutes, and the relative nuclear localization of phospho-TAK1 assessed. PBECs were stained with phospho-TAK1 and β-actin, along with DAPI as a nuclear counterstain. Nuclear localization of phospho-TAK1 was increased following stimulation with both TGF-β1 (74.5 ± 1.7) and, to a lesser extent, TNF-α (29.8 ± 1.0) compared to control cells (5.1 ± 0.1). Co-stimulation with TGF-β1 and TNF-α resulted in an accentuated nuclear localization of phospho-TAK1 (156.2 ± 5.6) compared to either TGF-β1 or TNF-α stimulation alone (Figure 7, B and C; see also Supplemental Figure S5B at http://ajp.amjpathol.org). Alongside this, to confirm the observed nuclear translocation of TAK1, nuclear and non-nuclear fractions were prepared from PBECs treated with TGF-β1 or TNF-α for 30 minutes. The cell adhesion protein E-cadherin and rat sarcoma-related nuclear protein (Ran), a nuclear specific rat sarcoma guanosine triphosphate hydrolase enzyme, were used as markers to confirm the purity of the respective fractions. Phospho-TAK1 is expressed in both the nuclear and non-nuclear fractions and displays the same accentuated response to stimulation with TGF-β1 and TNF-α described in both total cell lysate Western blots and immunocytochemistry (Figure 7D).