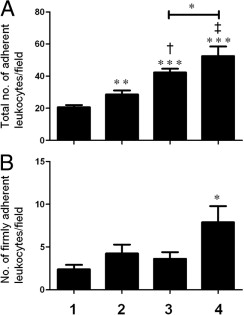 C57BL/6 male mice, aged 10 to 12 weeks, were supplied by the Medical Research Facility (University of Aberdeen, Aberdeen, UK). All animals were housed according to the guidelines described in the Association for Research in Vision and Ophthalmology Statement for the Use of Animals in Vision and Ophthalmic Research and also in accordance with requirements of the Animal License Act (UK). In addition, the procedures were approved by the Home Office Regulations for Animal Experimentation (UK). C57BL/6 mice weighing >30 g were made diabetic with a single i.p. injection of streptozotocin (STZ; 150 to 180 mg/kg) freshly dissolved in 0.9% sodium chloride w/v (Macoflex; MacoPharma, London, UK) and housed in conventional cages for 2 weeks. Glycemia control was performed on blood using a glucometer (Ascensia Spirit2; Bayer, Newbury, UK). After the animals were sacrificed, cardiopuncture was performed and red blood cell–glycated hemoglobin (Hb A1c) was measured using a nonenzymatically Glyco-Tek affinity column (Helena Biosciences Europe, Newcastle upon Tyne, UK).

Preparation of Cell Suspensions from Healthy and Diabetic Tissues

For in vivo SLO experiments (see later), spleen leukocytes (2 × 106 cells/mL) in complete RPMI 1640 medium were incubated with 40 μg/mL calcein-AM (Molecular Probes, Leiden, The Netherlands) at 37°C for 30 minutes. Cells were washed and assessed for viability by dye exclusion. Leukocyte fluorescence was confirmed by microscopy (Olympus, London, UK), and cells were suspended at 1 × 108/mL in RPMI 1640 medium before adoptive transfer. Leukocytes were adoptively transferred between donor and recipient diabetic and nondiabetic (control) mice in various combinations, as follows: group 1, control; group 2, diabetic (donor only); group 3, diabetic (recipient only); group 4, diabetic (recipient and donor); group 5, control, rosuvastatin treated; group 6, diabetic (donor and recipient, rosuvastatin treated); group 7, diabetic (recipient only, rosuvastatin treated); group 8, diabetic (donor only, rosuvastatin treated, prevention group); group 9, same as for group 6, plus mevalonate treated; and group 10, same as for group 6, but rosuvastatin administered after diabetes established, intervention group.
For ex vivo tracking of labeled leukocytes in retinal flat mounts, BM cells (2 × 107) were labeled with 10 μg/mL of calcein-AM in 0.1% bovine serum albumin/PBS for 30 minutes at 37°C. After thorough washes, the cells were resuspended in PBS for i.v. injection. One hour after injection, the mice were sacrificed, the eyes were enucleated, and the retinas were dissected, fixed, permeabilized, and prepared as previously described.

Recipient mice were anesthetized with 0.4 mL/kg fentanyl-fluanisone (Hypnorm; Janssen-Cilag Ltd, Brussels, Belgium) i.m. and with 1 mL/kg diazepam (Phoenix Pharmaceuticals Ltd, Gloucester, UK) i.p., producing deep anesthesia for 1 hour. Pupils were dilated with 0.5% (w/v) tropicamide (Minims; Chauvin Pharmaceuticals Ltd, Essex, UK). A hard contact lens [clear polymethylmethacrylate: refractive index, 1.51; radius of curvature, 1.7 mm; diameter, 3.2 mm (Cantor & Nissel, Northamptonshire, UK)] was placed on the mouse cornea to obtain a clear view of the fundus. Viscotears were applied to generate smooth contact between the eye and the lens. Animals were kept immobile and maneuvered for examination using a movable tripod. A low dose (0.1 mL of 0.1% sodium fluorescein; Sigma, Poole, UK) was injected i.v. via the tail vein to outline the retinal vasculature, and animals were positioned for optimal viewing of the ocular fundus before i.v. infusion of 1 × 107 in 100 μL of calcein-AM–labeled leukocytes.
Equivalent fundus areas of each mouse were examined using a custom-built SLO at the University of Aberdeen School of Medicine.
26
Digital fundus imaging using a scanning laser ophthalmoscope.
Physiol Meas. 1993; 14: 43-56
In each animal, the nasal fundus adjacent to the optic disc was chosen and the animal was positioned so that a retinal artery and vein could be viewed. An argon laser (wavelength, 488 nm) was used to excite, and a 515-nm barrier filter was used to detect fluorescence. Real-time images were recorded continuously for the first 30 minutes after administration of fluorescent leukocytes into recipient mice using a DVD recorder (Sharp, Uxbridge, UK), as previously described.
27
Improved leukocyte tracking in mouse retinal and choroidal circulation.
Exp Eye Res. 2002; 74: 403-410
When analyzing the DVD images, leukocytes were classified as either free flowing or stopping/adhering for a period of 1 to 2 seconds (transient attachment), 3 to 20 seconds (prolonged attachment), or >20 seconds (permanent adhesion), and the total number of cells stopping for >1 second was calculated.

Single-cell suspensions were prepared as previously described, and cell viability was checked by trypan blue (VWR International Ltd, Leicester, UK) staining using a hemocytometer. BM and spleen (1 × 106 cells/test), blood (5 × 105 cells/test), and retina (single retina/test) cells were resuspended in 10% rat and mouse serum (Serotec, Oxford, UK) to block nonspecific fluorescence and then incubated with a 1:50 dilution of antibody cocktail for 30 minutes at 4°C. The antibody panel used was CD45-allophycocyanin, CD11b-PerCpCy5.5, and CCR5-phosphatidylethanolamine monoclonal rat anti-mouse (BD Biosciences Pharmingen) and CCR2 and fractalkine chemokine receptor (CX3CR1) rabbit biotinylated with phosphatidylethanolamine-Cy7 (Abcam, Cambridge, UK). A biological positive control of CCR5 expression was performed by in vitro stimulation of splenocytes with concanavalin-A and IL-2 incubated at 37°C and 5% CO2 for 3 days. Cellular staining was detected using a BD Biosciences LSR flow cytometer (BD Biosciences Pharmingen) with Ar and HeNe lasers. A total of 50,000 events were captured for each sample. Flow Jo cell analysis program (Tree Star, Inc., Ashland, OR) was used to analyze flow cytometric data, where gates and instrument settings were set according to forward and side scatter characteristics and populations gated to exclude dead or clumped cells.

Data for the ex vivo analysis are expressed as mean ± SD. Statistical significance was determined by using an unpaired Student t-test, one or two tailed, as appropriate. The correlation was calculated using Spearman's test. Data for the in vivo analysis are presented as the mean ± SE. They were subjected to Bartlett's test for homogeneity of variances before analysis of variance. Where significance was reached (P < 0.05), between-group differences were established using the Newman-Keuls multiple-comparison test. All calculations were made using a standard software package (Prism3; Graphpad, San Diego, CA).

We previously reported that the retinal changes in the STZ-induced mouse model of early-onset DR (2 weeks) manifested predominantly as capillary leukostasis.
28
Inducible nitric oxide synthase isoform is a key mediator of leukostasis and blood-retinal barrier breakdown in diabetic retinopathy.
Invest Ophthalmol Vis Sci. 2007; 48: 5257-5265
A single injection of STZ (150 to 180 mg/kg) induced weight reduction, glycosuria (data not shown), and elevated blood glucose, with corresponding increased Hb A1c levels (see Supplemental Tables S1 and S2 at http://ajp.amjpathol.org). A separate set of animals was used for the in vivo analysis, with similar results (data not shown). Neither weight loss nor plasma glucose levels were significantly altered by rosuvastatin treatment alone or with mevalonate cotreatment (see Supplemental Table S2 at http://ajp.amjpathol.org). Total plasma cholesterol and triglyceride concentrations were not significantly altered by STZ-induced diabetes or treatment with rosuvastatin (see Supplemental Table S2 at http://ajp.amjpathol.org).

Retinal whole mounts were triple stained using CD31 to reveal the vasculature and various leukocyte markers to identify leukocyte subsets, as described in Materials and Methods. Retinal vessels in 2-week-old diabetic mice contained increased numbers of CD45+ leukocytes. In addition, there appeared to be a selective increase in the numbers of intravascular CD11b+ cells, whereas GR-1+ and CD3+ T cells were not significantly increased. Few, if any, CD11b+ leukocytes appeared to be situated extravascularly in the retinal parenchyma (Figure 2A). Quantitative analysis indicated that the increase in CD45+ leukocytes in the retina of diabetic mice was statistically significant (P = 0.0005) and was predominantly attributable to increased numbers of CD11b+ cells (P = 0.002; Figure 2B).
To confirm the source of the adherent retinal CD11b+ cells as circulating BM-derived cells, adoptive transfer of calcein-AM–labeled BM-derived cells was performed from healthy to healthy mice (control) and from diabetic to diabetic mice. In the first set of experiments, retinas were flat mounted after perfusion of the circulation with Evan's blue dye to delineate the retinal vasculature. Figure 3 shows that the labeled leukocytes remained within the vasculature, that there were more intravascularly entrapped leukocytes in mice with diabetes than in healthy control mice, and that none of the labeled cells were detected within the neural retinal tissue, indicating that within this time frame (1 hour after transfer), no extravasation of cells occurred. In a second series of mice, retinas of the recipient mice were flat mounted 1 hour after adoptive transfer of calcein-AM–labeled BM-derived cells and stained with anti-CD11b antibody. Figure 4A shows that the calcein-AM–positive cells also stained for CD11b and that more double-positive cells were found in retinas from diabetic mice (P = 0.046; Figure 4B).

Chemokine polymorphisms have been associated with the complications of diabetes,
10
CCR5Δ32 genotype is associated with outcome in type 2 diabetes mellitus.
Diabetes Res Clin Pract. 2009; 86: 140-145
and there may be a genetic susceptibility that correlates with leukocyte-endothelial cell interactions in such circumstances. This may, however, be restricted to certain subset populations,
29
Genetic associations in diabetic nephropathy: a meta-analysis.
Diabetologia. 2011; 54: 544-553
although, interestingly, CCR5−/− nonobese diabetic mice developed a more severe form of diabetes, whereas CCR2−/− mice were less affected.
30
CCR2 and CCR5 chemokine receptors differentially influence the development of autoimmune diabetes in the NOD mouse.
Autoimmunity. 2010; 43: 156-163
We, therefore, investigated, using flow cytometry, whether there were changes in chemokine receptor expression in circulating CD11b+ leukocytes that might have indicated an increased tendency to home to peripheral tissues. Our data revealed that there was a greater percentage of CCR5+CD11b+ cells in the blood (P = 0.04) and spleen (P = 0.002) from 2-week-old diabetic mice (Figure 5, A and B) compared with healthy control mice. However, although there was a trend toward higher CCR5 expression in retinal cells of diabetic mice compared with healthy mice, this was not statistically significant. Interestingly, the numbers of CCR2+CD11b+ cells were only increased in the spleen (P = 0.001) but not in the blood or in the retina of diabetic mice compared with nondiabetic mice (Figure 5, A and C). In contrast, CX3CR1 expression was up-regulated on retinal (P = 0.05) and spleen (P = 0.0001) CD11b+ cells from diabetic mice (Figure 5, A and D). Also, the geometric mean fluorescence of CX3CR1 was up-regulated on retinal CD11b+ cells isolated from diabetic mice (P = 0.013, Table 1). Increased CCR5 expression on circulating CD11b+ cells correlated weakly with the level of hyperglycemia (P = 0.05, r = 0.276) (data not shown).
Table 1Increased Mean Fluorescence Intensity of CX3CR1 on CD11b+ Cells of Diabetic Retinal Cell Suspension by Flow Cytometry
Data are expressed as mean ± SD (n = 7), and the unpaired Student's t test was used to calculate the significance.

The diabetes-induced increase in retinal leukocyte adhesion was abolished by rosuvastatin treatment, using both prevention (group 6, 18.8 ± 2.3) and intervention (group 10, 19.6 ± 1.0) protocols of donor and recipient mice (P < 0.001; Figure 6) (see Materials and Methods and figure legends for details of group categories). The drug itself had no effect on basal levels of leukocyte adhesion, because the total number of adoptively transferred leukocytes stopping in the retinal circulation of rosuvastatin-treated control mice did not differ significantly from untreated control mice (group 1 versus group 5, 20.7 ± 2.9 versus 20.6 ± 1.4; P > 0.05; Figure 6). Rosuvastatin treatment of recipient animals only inhibited diabetes-induced leukocyte adhesion (group 7 versus group 4, 20.4 ± 3.0 versus 48.6 ± 6.6; P < 0.001). However, leukocytes from rosuvastatin-treated diabetic mice were almost equally as adherent as leukocytes from untreated diabetic mice (group 8 versus group 4, 36.6 ± 4.1 versus 48.6 ± 6.6; Figure 6), despite some reduction in overall events. Interestingly, cotreatment with mevalonate abrogated the effect of rosuvastatin on retinal leukocyte adhesion in diabetic mice, as shown by the absence of a significant difference between this group (group 9) and the diabetic group (group 4) (45.1 ± 4.0 versus 48.6 ± 6.6; Figure 6). The effects of rosuvastatin were confirmed in whole mount preparations using adoptive transfer of calcein-AM–labeled cells (data not shown).

We thank Dr. Simon Wong and Dr. Antonia Joussen for the critical revision and Dr. Joyce Yeoh for the review of the manuscript.

Supported by the Development Trust of University of Aberdeen and student funding from AstraZeneca (J.W.).

A.M.S. and J.W. contributed equally to this work.