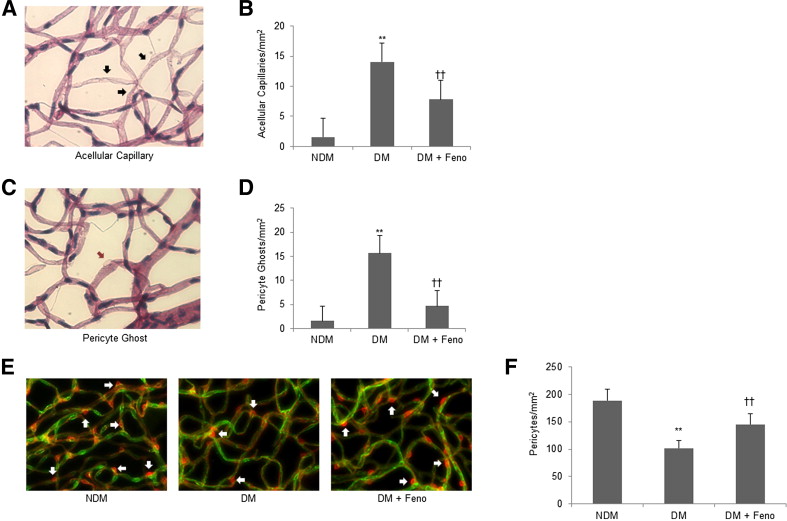 PPARα−/− mice and age- and genetic background–matched C57/BL6J mice [wild-type (WT) mice] were purchased from Jackson Laboratories (Bar Harbor, ME). All of the animal experiments were in strict agreement with The Association for Research in Vision and Ophthalmology Statement for the Use of Animals in Ophthalmic and Vision Research and approved by the Institutional Animal Care and Use Committee of The University of Oklahoma (Oklahoma City, OK).

Retinal digestion was performed according to a procedure described previously, with some modifications.
22
KIOM-79 protects AGE-induced retinal pericyte apoptosis via inhibition of NF-kappaB activation in vitro and in vivo.
PLoS One. 2012; 7: e43591
Briefly, the eyeballs were fixed in 10% neutral-buffered formalin for at least 3 days. The retina was dissected and digested with 5% trypsin for 60 minutes. The retinal vasculature was gently isolated and stained with Periodic Acid–Schiff (PAS) Staining System (Sigma-Aldrich, St. Louis, MO). Acellular capillaries and pericyte ghosts in flat-mounted retinal vasculature were quantified from eight random fields per retina, according to a documented protocol.
23
The RAGE axis in early diabetic retinopathy.
Invest Ophthalmol Vis Sci. 2005; 46: 2916-2924

The purity of HRCP and mouse retinal pericytes was confirmed by immunofluorescence with antibodies against specific pericyte markers, α-smooth muscle actin (α-SMA; Sigma-Aldrich) and NG2.

A human PPARα cDNA clone (http://www.ncbi.nlm.nih.gov/genbank; GenBank accession number NM_001001928) was purchased from GeneCopeia (Rockville, MD). The full-length coding region of the PPARα cDNA was amplified by PCR using primers (forward primer, 5′-GCGGCCGCCACCATGGTGGACACGGAAAGCCCAC-3′; and reverse primer, 5′-AGCGCTGTACATGTCCCTGTAGATCTCC-3′). The PCR product was cloned into the pGEM-T easy vector (Promega, Madison, WI), and the sequence was confirmed. The clone without any mutation was digested with NotI and AfeI, and then subcloned into pBluscript with a 1D4 epitope sequence (ETSQVAPA, encoded by 5′-ATCAGCGCTGAGACCAGCCAAGTGGCGCCTGCCTAAGTCGACC-3′) fused to the carboxyl terminus of the PPARα cDNA. The 1D4 epitope is a peptide from bovine rhodopsin, which is used as a detection tag in this study. The full-length PPARα-1D4 was digested by KpnI, and its sticky ends were blunt ended using Klenow fragment (New England BioLabs, Ipswich, MA). After heat inactivation of Klenow fragment, the insert was further digested with NotI and subcloned between NotI and EcoRV sites of pShuttle-Cmv IRES-hrGFP (Agilent Technologies, Santa Clara, CA) for construction of adenovirus. Preparation, amplification, and titration of the recombinant adenovirus expressing PPARα-1D4 (Ad-PPARα) were performed as described previously.
27
RPE65 is the isomerohydrolase in the retinoid visual cycle.
Proc Natl Acad Sci U S A. 2005; 102: 12413-12418
HRCPs were infected with either a control adenovirus (Ad-β-gal) or Ad-PPARα [multiplicity of infection (MOI), 50 each], mixed with polyethylenimine (Sigma-Aldrich), following a previously described procedure.
10
Palmitate-induced apoptosis in cultured bovine retinal pericytes: roles of NAD(P)H oxidase, oxidant stress, and ceramide.
Diabetes. 2005; 54: 1838-1845

Cells were seeded in an 8-well chamber (BD Biosciences, San Jose, CA) at 1 × 104 cells per well for 24 hours. The cells were fixed with 4% paraformaldehyde for 1 hour, and used for terminal deoxynucleotidyl transferase-mediated dUTP nick-end labeling (TUNEL; Roche, Indianapolis, IN), following the manufacturer's instructions.

HRCPs (1 × 106) were harvested, washed with phosphate-buffered saline, and diluted in 0.75 mL Hanks' balanced salt solution (Life Technologies Corp.). Respiration was measured polarographically at 37°C with a Clark-style oxygen electrode (Instech, Plymouth Meeting, PA). Carbonyl cyanide 4-(trifluoromethoxy)phenylhydrazone (1 μmol; Sigma-Aldrich) was added to stimulate maximal respiration after 10 minutes. The addition of 2.0 μmol/L rotenone inhibited >95%, thus demonstrating that oxygen consumption was mitochondrial dependent. The starting amount of molecular oxygen in the 0.6-mL electrode chamber was based on the assumption that 213 nmol/mL of molecular oxygen is dissolved at atmospheric pressure and 37°C.

All quantitative data were expressed as means ± SD. Statistical analysis was performed using a Student's t-test for comparison of two groups and using one-way analysis of variance for studies of more than two groups. Statistical significance was set at P < 0.05.