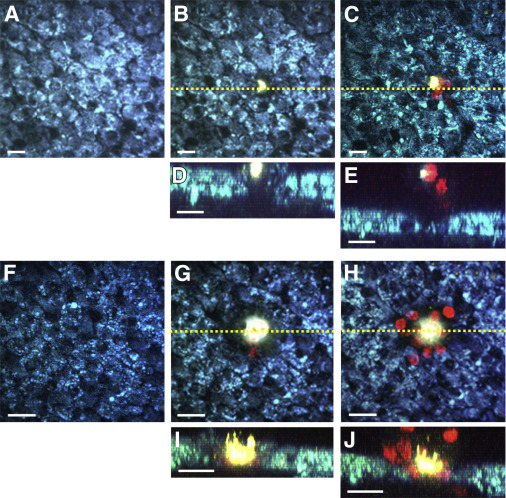 For tracheal imaging, male C57BL/6 6- to 25-week–old mice were used (Charles River Laboratories, Sulzfeld, Germany). All animals were kept according to institutional guidelines, with a 12-hour day-night cycle and food and drink ad libitum. All animal experiments were approved by the Ministry of Energy, Agriculture, the Environment, Nature and Digitalization.

Tissues were prepared as previously described.
25
Autofluorescence multiphoton microscopy for visualization of tissue morphology and cellular dynamics in murine and human airways.
Lab Invest. 2016; 96: 918-931
Briefly, mice were euthanized by inhalation of isoflurane (Baxter, Unterschleißheim, Germany). The thorax was opened, and the submandibular gland and the infrahyoid musculature were removed. The trachea was cut caudal to the larynx and cranial to the bifurcation and transferred to a Delta T4 Culture Dish (Bioptechs, Butler, PA). The bottom of the dish was covered with a thin film of Sylgard polymer (Dow Corning, Wiesbaden, Germany) to allow fixation of the tissue with insect needles and was filled with 2 mL HEPES-buffered Ringer's solution, pH 7.4. Connective tissue and blood vessels were removed. For imaging the tracheal epithelium with high resolution, the trachea was oriented with the trachealis muscle facing upward. To expose the epithelium, the tracheal muscle was cut. Before imaging, the HEPES-buffered Ringer's solution was replaced with fresh buffer and the culture dish was transferred to the Delta T Stage holder (Bioptechs, Butler, PA), which kept the sample at 37°C during the experiment.

With the JenLab DermaInspect, lesions were induced by focusing the titanium-sapphire femtosecond laser beam at 81 mW radiant flux at the exit of the objective to single epithelial cells for 2 to 8 seconds. With the TriM Scope multiphoton microscope, a distinct small scan field with one to six cells (10 to 40 μm2) was scanned, with a high laser power of 50 to 55 mW exiting the objective for 2 to 5 seconds to damage the cells in this focused area. No differences in lesions were detected by optical imaging and electron microscopy between the two microscopes.
Propidium iodide (BD Biosciences, Heidelberg, Germany; 0.1 μg/mL) was present in the bath solution throughout the experiment to stain damaged cells.

5-Ethynyl-2′-deoxyuridine (EdU) is a nucleoside analog of thymidine whose incorporation can be used to label cells undergoing DNA replication. Proliferating cells in the trachea were evaluated by using the Click-iT EdU Alexa Fluor 594 Imaging Kit (Invitrogen, Dreieich, Germany), according to the manufacturer's instructions. Briefly, after laser-induced lesioning of tracheal epithelial cells, the tissue was incubated with 10 μmol/L EdU for 2, 4, or 6 hours at 37°C, then fixed with 3.7% formaldehyde for 15 minutes, and treated with 0.5% Triton X-100 for 20 minutes at room temperature. After washing twice with phosphate-buffered saline, the cells were reacted with Click-iT reaction cocktail for 30 minutes. Subsequently, cell nuclei were stained with Hoechst 33342 (Invitrogen), and tracheae were imaged by multiphoton microscopy.

After induction of epithelial lesions and multiphoton microscopy, tracheae were transferred to a cork tile (approximately 15 × 10 × 2 mm) and were positioned using insect needles. Afterward, the tile was transferred upside down into 4% phosphate-buffered saline–buffered paraformaldehyde (pH 7.4) for 1 to 12 hours for fixation. Then, the tracheae were rinsed three times for 15 minutes with phosphate-buffered saline and incubated with phalloidin conjugated to Atto 550 (1:10,000; Sigma-Aldrich). After rinsing with phosphate-buffered saline for three times for 15 minutes, tracheae were mounted between coverslips using buffered Mowiol-4-88 (Sigma Aldrich). Whole mounts were imaged using a confocal laser scanning microscope (510; Carl Zeiss Microscopy GmbH). Damaged areas were identified by their strong autofluorescence and/or by overlaying the multiphoton images with the confocal images.

Femtosecond-Laser Irradiation Can Be Used to Lesion the Airway Epithelium

The laser beam of the titanium-sapphire laser can be used to induce small lesions (Figure 1, A–E ), comprising one to four cells, or by increasing scan duration, up to 12 cells (Figure 1, F–J). Lesions were visible by hyperfluorescent cell debris (Figure 1, B–E and G–J). Depending on the size of the lesion, a loss of the autofluorescent signal in the cells surrounding the hyperfluorescent debris was sometimes observed (Figure 1, G–J). Propidium iodide in the bath solution stained the nuclei of damaged cells (Figure 1, C, E, and G–J). The cell(s) in the laser focus were immediately propidium iodide positive, and damaged surrounding cells were stained during the following hour. Larger lesions contained up to four to six propidium iodide–positive cells, and the number increased during the observation time.

Of all lesions up to four cells, 93% closed within 4 hours. After 6 hours, 70% of lesions with five to six damaged cells closed. In contrast, 67% of lesions larger than six cells did not close during the observation period (Figure 2).

Observation of the time course of lesion closure revealed that in lesions up to six cells, the closure was mainly driven by the surrounding cells. The surrounding cells changed their shape and elongated to close the lesion (Figure 3). During the protrusion of the surrounding cells, the damaged cells were extruded from the epithelium and were quickly removed from the extrusion site, most likely by cilia-driven fluid flow (Supplemental Video S1). Electron microscopy confirmed that the surrounding columnar epithelial cells closed the wound by cell protrusions (Figure 4, A–D ). In some lesions, epithelial cells were not removed and remained close to the lesion site. However, scanning electron microscopy confirmed data from multiphoton microscopy that lesions were closed even if the cell debris was not removed (Figure 4, E–H).

In lesions that did not close during the observation period of 6 hours, the surrounding cells largely remained in their position within the epithelium and exhibited less change of their shape (Figure 5, A–E ). The cell debris often remained close to the lesion site, and the surface epithelium was not able to close the lesion within the observation period. Analysis of damaged areas by scanning electron microscopy confirmed only limited participation of surrounding epithelial cells (Figure 5F). Analysis of larger lesions with transmission electron microscopy indicated that, in many experiments, only the surface epithelium was affected, and the basal epithelial cells covered the basement membrane at the lesion site (Figure 6). In some experiments, it was confirmed that, in addition to surface epithelial cells, the laser damage affected the basal cells and the basement membrane (Figure 7).

To investigate the effect of proliferation on wound closure after laser-induced lesioning, the tissue was incubated with EdU for 2, 4, and 5 hours after laser treatment. At each time point, 6 to 12 lesions of different sizes were examined. The cells directly surrounding the lesioned region showed no proliferation (Figure 9). In other areas of the trachea, some, albeit few, proliferating cells could consistently be observed.

Supported by internal funding from the German Center for Lung Research 82DZL00102 (P.K. and G.H.).