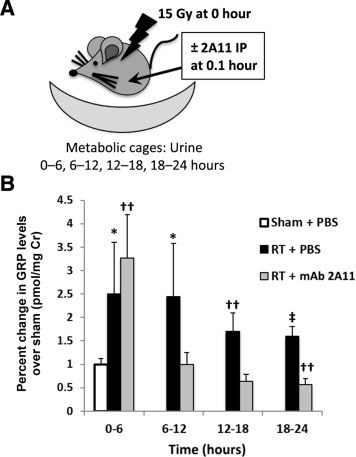 L/J mouse breeder pairs were purchased from Jackson Laboratories (Bar Harbor, ME) and then bred at Duke University (Durham, NC). All experiments were approved by the Duke Institutional Animal Care and Use Committee and followed the guidelines of the NIH Guide for the Care and Use of Laboratory Animals.
8
Committee for the Update of the Guide for the Care and Use of Laboratory Animals; National Research Council: Guide for the Care and Use of Laboratory Animals: Eighth Edition.
National Academies Press, Washington, DC2011
Female L/J mice, at 8 to 12 weeks of age, were exposed to 15 Gy of thoracic radiation using a custom-designed small animal platform
9
Development and dosimetry of a small animal lung irradiation platform.
Health Phys. 2012; 103: 454-462
and harvested for outcomes at 24 hours or 15 weeks post-RT.
4
Radiation-induced lung injury is mitigated by blockade of gastrin-releasing peptide.
Am J Pathol. 2013; 182: 1248-1254
At 1 or 24 hours post-RT, a subset of mice was injected intraperitoneally with a low endotoxin and azide-free GRP-neutralizing mouse mAb 2A11 (5 μg/kg intraperitoneally; kindly provided by F.C.). Urine was obtained and lungs were harvested at 24 hours or 15 weeks post-RT. Before harvest, mice were euthanized by CO2 asphyxiation.

Urine was collected for 6 hours by placing the mice in metabolic cages (model MMC100; Hatteras, Cary, NC). After collection, urine was stored at −80°C until assayed. The identity of the urine samples was coded so that the individual performing the assays had no knowledge of either the mouse or time of origin. For the GRP EIA, we treated urine samples with acetic acid (1N) and heated them to 95°C for 5 minutes to aggregate binding proteins, which precipitated and then were separated by centrifugation. GRP was assayed in supernatants using a standardized human GRP EIA kit, 100% specific for both human and mouse GRP (Phoenix Pharmaceuticals, Burlingame, CA), as previously described.
10
Bombesin-like peptide mediates lung injury in a baboon model of bronchopulmonary dysplasia.
J Clin Invest. 1998; 102: 584-594
Results were normalized for creatinine assayed using nonacidified urine samples with a commercially available kit (Cayman Chemicals, Ann Arbor, MI).

Absorption of mAb 2A11 with Solid-Phase GRP

We performed immunostaining for the mature GRP peptide (a PNEC neurosecretory granule marker) and PGP 9.5 (the neural/NE cytoplasmic isoform of ubiquitin–C-terminal hydrolase 1), as described previously.
4
Radiation-induced lung injury is mitigated by blockade of gastrin-releasing peptide.
Am J Pathol. 2013; 182: 1248-1254
For GRP and PGP 9.5 IHC, formalin-fixed, paraffin-embedded lung sections were treated for 10 minutes with Triton X-100 (0.3% in PBS; Sigma-Aldrich, Raleigh, NC), and then normal serum blocking was performed, as described.
4
Radiation-induced lung injury is mitigated by blockade of gastrin-releasing peptide.
Am J Pathol. 2013; 182: 1248-1254
Diluted primary antibodies were added to sections overnight at 4°C, followed by washing in PBS and 2 hours at 4°C with a 1:200 dilution of biotinylated secondary antibodies (Vector, Burlingame, CA). After blocking in 3% H2O2 in methanol, Vector ABC Elite was applied to slides for 30 minutes. Slides were developed by using diaminobenzidine and hydrogen peroxide, then counterstained in 2% aqueous methyl green. For α-SMA IHC, sections were pretreated with Triton X-100, followed by 1:60 anti–α-SMA mAb conjugated with alkaline phosphatase incubated at 4°C overnight. After washing, slides were developed with Vector Impact Red and counterstained with methyl green. Trichrome staining was performed by standard methods at the Duke Histopathology Research Core Laboratory by using light green for staining collagen.

Urine Levels of GRP Are Increased after RT Exposure

To identify PNECs in lung tissue from RT-exposed mice, we performed IHC. GRP is a neurosecretory granule NE marker, and PGP 9.5 is an NE cytoplasmic marker.
12
Lung endocrine cell markers, peptides, and amines.
Anat Rec. 1993; 236: 169-171
In nonradiated sham controls, normal-appearing NE cell clusters are strongly PGP 9.5+ (Figure 2A); modest PGP 9.5+ staining is occasionally visible in some epithelial cells adjacent to PNEC clusters, consistent with early NE cell differentiation. An internal positive control was used for PGP 9.5 intrapulmonary nerve fibers. PGP 9.5+ cells 6 hours post-RT (Figure 2B) appear similar to sham controls. At 24 hours post-RT, there was a trend toward increased total numbers of PGP 9.5+ cells per lung area (Figure 2C). In sham controls, most NE cells were GRP negative or had modest GRP immunostaining in L/J mice (Figure 2D).
12
Lung endocrine cell markers, peptides, and amines.
Anat Rec. 1993; 236: 169-171
At 6 hours post-RT, scattered PGP 9.5+ foci (Figure 2C) had modest GRP immunostaining in adjacent sections (Figure 2E). Most of the GRP immunostaining in lung post-RT was in distal alveolar airspaces and venules at 6 hours (Figure 2E) and 24 hours (Figure 2, F and G) post-RT. We did not observe GRP immunostaining in conducting airways (Figure 2G). To confirm the specificity of the GRP staining, we performed negative controls by using immediately adjacent sections: Figure 2H to Figure 2G and Figure 2J to Figure 2I, run in parallel with the same 1:100 dilution of mAb 2A11 preabsorbed with solid-phase GRP (Figure 2, G–J). These observations demonstrate that GRP is specifically increased at early time points in the lung after RT exposure, consistent with the data from the urine studies.

Given the early increase in GRP after RT, we were interested in determining if suppression of this early GRP would affect RTPF development. Therefore, we blocked GRP using mAb 2A11 (100 μg intraperitoneally) at 24 hours post-RT (RT + mAb 2A11) (Figure 3A), compared with PBS-treated mice (RT + PBS) and nonirradiated sham controls as positive and negative controls, respectively. At 15 weeks after exposure, animals were harvested and histologic staining was performed for α-SMA, TRI, and collagen-I (Col-I) staining (Figures 3 and 4). α-SMA is a marker of normal smooth muscle and myofibroblasts.
13
Genesis of the myofibroblast in lung injury and fibrosis.
Proc Am Thorac Soc. 2012; 9: 148-152
Myofibroblasts are a hallmark of early fibrosis during which pericytes localized to small peripheral blood vessels differentiate into myofibroblasts and migrate into injured tissues. Representative photomicrographs of α-SMA IHC are given in Figure 3, B–D. Sham controls (Figure 3B) demonstrated the expected distribution in normal smooth muscle of airways and blood vessels (venules). In RT + PBS lung 15 weeks post-RT, we observed markedly increased myofibroblasts in alveolar walls (Figure 3C). In contrast, in RT + mAb 2A11 lung 15 weeks post-RT, compared with mice exposed to RT + PBS, we observed markedly reduced α-SMA+ immunostaining in alveolar walls (Figure 3D), with most α-SMA+ immunostaining being restricted to airway and vascular smooth muscle (Figure 3D).
TRI is a marker of the synthetic phase of fibrosis and can represent interstitial collagen deposition in alveoli.
14
Myocardial collagen in cardiac hypertrophy resulting from chronic aortic regurgitation.
Am J Ther. 1998; 5: 139-146
Sections of mouse lung at 15 weeks post-RT are shown in Figure 3, E–G. No interstitial collagen was observed in sham controls (Figure 3E), which had normal TRI staining in association with conducting airways and blood vessels (venules). Interstitial collagen was observed 15 weeks post-RT + PBS (Figure 3F). This interstitial collagen was markedly reduced 15 weeks post-RT + PBS in mice treated with a single dose of mAb 2A11 at 24 hours post-RT (Figure 3G).
To demonstrate that the TRI staining is collagen specific, we performed immunostaining for Col-I, the principal collagen secreted by synthetic fibroblasts, in serial sections of normal L/J lung (Figure 4B) and in mice 15 weeks after 15-Gy RT was given (Figure 4D). Image in Figure 4, A and C, were TRI stained, and this staining aligned well with Col-I immunostaining in immediately serial sections (Figure 4, B and D). Normally, Col-1 is distributed extracellularly around bronchioles and vasculature (Figure 4, B and D). At 15 weeks post-RT (Figure 4, C and D), TRI and Col-1 staining infiltrated the alveoli, staining small nodules of dense fibrosis in 3 of 11 mice (Figure 4, C and D). Thus, 27% of RT + PBS mice developed one or two small solid nodules of TRI+/Col-1+ fibrosis in distal lung, approximately 50 to 150 μm in diameter, that obscured alveolar architecture (Figure 4, C and D). None of the RT + mAb 2A11 mice had any solid foci (data not shown).
Given the validation of TRI as a specific marker of collagen in lung (secreted by synthetic fibroblasts), we performed quantitative ImageJ analysis for both α-SMA and TRI in close serial sections to define the extent of fibrosis in the various groups, focusing on the distal alveolar region in which collagen is not normally observed. As shown in Figure 4E, there was 15-fold more α-SMA and 5-fold more TRI in RT + PBS mice compared with either sham + PBS baseline mice or RT + mAb 2A11 controls. These data indicate that a single mAb 2A11 injection at 24 hours post-RT reduces numbers of α-SMA+ myofibroblasts and collagen deposition 15 weeks later in the distal alveoli of RT-exposed mice.
To address the hypothesis that GRP might promote RTP and/or RTPF by activating macrophages,
15
Novel role of gastrin releasing peptide-mediated signaling in the host response to influenza infection.
Mucosal Immunol. 2019; 12: 223-231
we performed CD68 immunostaining of lung sections from RT + PBS and RT + mAb 2A11 mice (Supplemental Figure S2). Only rare macrophages were detected in sham controls or in lungs at 6 or 24 hours post-RT (n = 4 per time point). There was no significant difference in numbers of CD68+ macrophages in lung at 15 weeks post-RT (quantified over all lobes on the entire slide as number of CD68+ cells per mm2 lung tissue) between RT + PBS and RT + mAb 2A11 mice (Supplemental Figure S2A). Only rare macrophages were detected in sham controls or in lungs at 6 or 24 hours post-RT (n = 4 per time point) (Supplemental Figure S2B). However, there was a distinct morphology between the two groups: RT + PBS mice had intensely CD68+ cells scattered throughout the alveoli of most of the slides (Supplemental Figure S2C). In contrast, in RT + mAb 2A11 mice, cells were less intensely CD68+ and tended to be clustered in niches, often in the subpleural region (Supplemental Figure S2D). The significance of differences in macrophage morphology and location is unclear from the present study.

We thank Dr. Mark Dewhirst for critical review of the manuscript and Steve Conlon for expert assistance with photomicrography.

R.M.T. and K.H. contributed equally to this work.